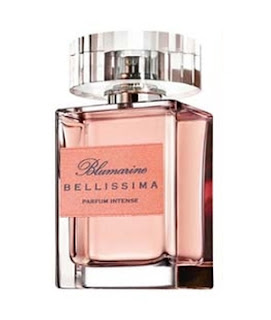 I'm not sure why I suddenly really wanted to try Bellissima Parfum Intense by Blumarine, I think it was the peachy uber-feminine packaging. I go through phases of aesthetics through the year at some point I will suddenly want to wear uber-feminine and then suddenly I want minimalist natural. Those are the two variations that happen the most often but this year I have suddenly wanted weird fruit. I think though I am suddenly veering again into the feminine category.

From what I can tell the design house of Blumarine is all about the uber-feminine aesthetic and they seem to be willing to hire very good perfumers for their scents, Sophie Labbe created this one and few others for them but taking a look at their other scents they have also hired Maurice Roucel, Christine Nagel, and more. 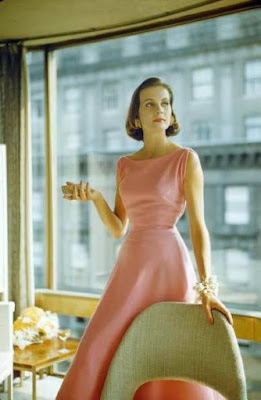 Bellissima Parfum Intense starts with tangy grapefruit, it's a watercolor grapefruit, this scent isn't about grapefruit so no need to begin hyper-realistic. Below that is a softly tinted well mannered passion fruit, it adds a sweet tang that then supports a really nice combo of peony and heliotrope. The combination of peony and heliotrope is my favorite part. It is a powdery duet of two rather lilting notes that smell very much like the idea of a gentle ballet in my head.

Try Bellissima Parfum Intense if you like Allure by Chanel, What We Do In Paris Is Secret by A Lab on Fire, or Love Chloe.

First image from fragrantica.com
Second image from photo by Nina Leen, 1954
Posted by Unknown at 8:44 AM