Well, no pictures in this post but quite a lot of info. So first up what I have cooked the last couple of days:

*Fava if you love split peas like I do then you must try this Greek dish. Cheap and delicious. Basically yellow split peas are added to a sautee of onions and olive oil and cooked to the point of a polenta like consistency. Delicious with capers and kalamata olives or spread on toast. And followed the following recipe: Fava Recipe with Eggplant Compote. I didn't have a red onion so used a golden onion and didn't bother with the Eggplant compote. None the less it was delicious.

*Once again I made Chocolate and Zucchine's Vanilla Pecan Bars for mother's day for Francisco's mom, Juana. I did an a little something different which was my dollope of homemade cajeta** and topped each dollop with a pecan.

*And yesterday I made my first recipe from The San Francisco Chronicle Cookbook Volume II, Arroz Caldo (Filipino Rice Porridge). Well I like the concept of it, but found that 3 tablespoons of fish sauce is too much for me and have decided I will go next time with the Chinese version congee which does not include fish sauce with keeps the wonderful biting quality of fresh ginger. Besides I suspect if ever made Arroz Caldo again I would be run out of the house by Dad because of the smell.

*And today I made Chocolate and Zucchine's Yogurt Cake. This is quite frankly delicious. I cannot wait for her to come out with her cookbook. One thing I did different with used dark rum instead because I don't have any light rum. Moist and fluffy. I definately want to experiment with it.

**Cajeta is "A thick, dark syrup or paste made from caramelized sugar and milk — traditionally goat's milk, although cow's milk is often used. Cajeta can be found in several flavors (primarily caramel and fruit) in Latin markets. It's used in Mexico and in some South American countries primarily as a dessert by itself or as a topping for ice cream or fruit." -Epicurious

And now on to the cheese:

Well, if you know me then you know of my bizarre relationship with cheese, I can eat a great deal of them melted, but if in raw form I become the pickiest creature ever, and this pickiness has made steer away from cheese. Yet, of late this steering away has slowly begun to veer towards cheese. So the other day I am Costco and see samples of Brie and I figure what the hey if I'm liking gorgonzola on my salad I might now be liking Brie. Well I was correct. I am now Brie fan; I even went so far this last Saturday while at Trader Joe's to buy a piece of triple creame Brie. It is gone now and I want some more. Yet, I have yet to get to point of liking to eat the rind.
Posted by Unknown at 7:05 PM 4 comments:

I admit this isn't very healthy...

I love a good cup of tea in the morning. My favorite type is something malty, darkly brewed, and with a splash of something creamy. I usually go with a chai, assam, or a hearty breakfast blend although of late I have tried to ease myself into the world of darjeeling. Yes caffeine isn't that good for you but there are worse things out there, yet you ask where is the unhealthy part coming in? Well my favorite creamer is whipping cream (no I don't do it everyday or week) yet about once month I have a small amount of whipping cream left usually left over from making some sort of dessert. So I would rather not waste it and I add it to my tea...I now regret doing so because it makes the tea wonderfully extravegantly rich and delicious. I really should get back to oolongs I wouldn't have this problem.
Posted by Unknown at 8:58 AM 3 comments: 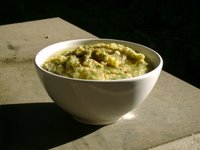 Well I was out with a friend today and I had suddenly a craving for the french provencal eggplant dip catoun (strangely enough I can find nothing on google for it). I had made it about five years ago based on recipe on the back of Vincent Van Gogh card that suggested provencal picnic foods ( I am now kicking myself for having used all the cards up). I served it at very fun tea party and I really liked it and in general had an agreement amongst guests that is was pretty good. Still I have made it since till today. Well I found the recipe card I had made for it and found in my usual over egotistical reliance on my memory/laziness that I had left out a lot of details still the recipe came out well so here it is:
Catoun
small eggplant
fresh garlic
olive oil
italian parsley
salt and pepper
-Roast eggplant over fire or in oven until charred and wrinkled (I pierced mine a few times with a fork).
-Peel eggplant and place pulp in bowl (I placed mine in the food processor).
-Mix with garlic*, parsley**, and olive oil*** (I food processed mine to creamy smooth consistancy)
-Add salt and pepper to taste
Put it in serving bowl, drizzled it with more olive oil, another grind of pepper, and a sprinkle of salt. I then dunked in toasted Kalamata olive bread. I am right day dreaming of it slathered on a pita bread with hummus, roasted bell peppers, and cucumbers.
*I used two cloves roughly chopped; next time just one clove
**I used a handful of parsley which probabley equals 1/4 cup
***I drizzled in the olive oil to my desired consistancy.
Posted by Unknown at 6:42 PM 4 comments:

After yesterday's visit to the Livermore Wine and Honey Festival I had a craving for watermelon and to be up front about it watermelon is my favorite melon*. Now plain watermelon is wonderful by its self, but I have a very simple way of making watermelon the epitome of hot summer eating.

Recipe:
Take slice of water melon
squeeze a lemon or lime over it
sprinkle a little salt on it (well how ever much you like
Next get some good chile powder and sprinkle over it ( I like to do mixes some time and add a little cayenne or chipotle powder) or if you want get some good hot sauce Valentina or Cholula are excellent for this. Now eat.

*There is nothing quite like the wonderful sweet crunch of a watermelon out of the fridge and the refreshing sweet taste.
*In Sicily it is common to sprinkle watermelon with fennel seeds and salt
*Yes this variation on watermelon is directly stolen from my Mexican boyfriend which is then stolen from the great street food snack of jicama, cucumber, and watermelon sliced put into cups then sprinkled with salt and chile powder and then a squeeze of lime.

So the question is how do you like your watermelon?

For the love of cardamom

Well sometimes it takes awhile to truly fall in love with a spice and then it knocks you out and suddenly you are a crazed lunatic that uses it everything until everyone else around you is saying "Why is there cardamom in my chicken tetrazinni?!" (alright I have never done this but it is the sort've thing people will do when they meet a spice that well ... "spices up their life.") So in my many adventures to Cost Plus World Market* I went their spice section and randomly chose some whole green cardamom pods because I felt adventuress well a month later I still have the pods in my cupbard.
Posted by Unknown at 5:27 PM No comments:

Well this is the first time showing one of my creations off...so here it is: 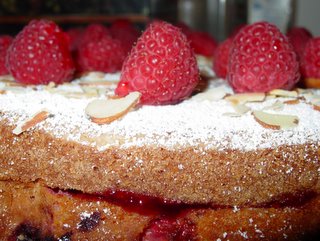 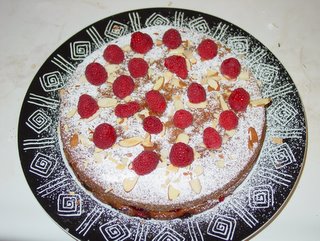 Well I was really rather proud of this last night considering it is the first cakes I have ever gone on a decoration spree with, I got the recipe over at Chocolate and Zucchini Gateau au yaourt a la framboise

And I made a few additions to it:

*Took her idea of slicing it in half, at which point I spread Trader Joe's Raspberry fruit spread mixed with about a table spoon of Trader Joe's Framboise heated it up a little, and then spread it on the inside. I then sprinkled slivered almonds on tip of the mixture.

*Re-assembled the cake, sifted powdered sugar on to the top, sprinkled toasted almonds on to it, and then put the rest of my left over raspberries on top.

Overall I am incredibly proud of how it came out.

Well, I'm a tea addict. Could be where I work or I finally found my true caffeine addiction (ironically I'm not a huge coffee drinker). So I decided to review some teas that I got at a local shop that just opened. The great thing about these teas was I did not have to buy a whole box but rather bought these ridiculously cute single serving tea bags that came in there own single serving boxes. The teas are from the brand Revolution Tea and the website is http://www.revolutiontea.com/

1. Royal Plum Decaf Tea
Smelled like a luscious vanilla plum. Gorgeous fragrance. The flavor left a lot to be wanted indistinct black tea and no real flavor of the plum.

2. Bombay Chai Tea
Scent heavy on the cloves in fact reminds me of cloves cigarettes while dry, brewed scent dissipated. Flavor: No spiciness in the cup of chai and the assam was very light missing the malty goodness of assam

Verdict: Revolution tea is not for me. A lot of talk but no deliverence of flavor. Proudly they talk of the fine mesh bag and loose leaf tea within bag but really there is not much to be proud of. I've had cheaper tea bags and cheaper teas produce more flavor than this. In fact I would take Celestial Seasoning's Bengal Spice over their chai .
Posted by Unknown at 9:15 AM No comments:

It might be a bit rickety here for awhile

Well spring is finally here in the Livermore Valley and in reality it is quickly becoming summer, in fact I am going to go into rant right now and say mother nature screwed me over and I didn't actually get a spring but rather it jumped from winter to summer. I like that nice middle area in spring where it is the 70's and the change in the light of day that is gradual. Where as the change in light was stormy darkness at 4 in the afternoon to it's bright and sunny at 6 in the evening. But off the rant because I really am happy to see my old enemy/friend the sun (I'm rather on the pale side and skin cancer runs in the family so I have a love/hate relationship with sun).
So what is on the creative menu coming up:
Minted Earl Grey Sorbet
My attempt at Saffron Ice Cream
Reviews of Tea
Posted by Unknown at 8:15 PM 1 comment: