So the gorgeous spring weather continues as a bit of a treat to myself I am going to the mall to do a bit of sniffing, so I'm only wearing lotion today, and the epitome of spring sometimes is the fragrance/idea of cherry blossoms.

And on to some small joys:
Recently a little frozen yogurt shop opened up and my official favorite topping of it is lychee, there is something very serene and soothing about the combo.

image provided by artnet.com
image: Geiko=Cherry by Tomiko Kato
video uploaded by pol115
Posted by Unknown at 9:24 AM 11 comments:

Some how I am in better spirits and I just don't want my heavy oriental fragrances so I instead I am spritzing on my sample of Miss Dior Cherie. I love that the notes of this look scary on paper but the reality is it is actually very classy, more of a clean musk.

And something to make you wish for summer, John Legend's P.D.A.


image provided by artnet.com
image: Yellow with Green Stars on Pink by Natasha Law
video uploaded by bluekat34
Posted by Unknown at 8:27 AM 2 comments:

So I haven't reached for an aldehydic beauty in awhile and I thought my sensual elixir deserved some attention, the day is cold and clear, and I think aldehydes sometimes do the best in this weather. Coldness keeps them bright and sparkling yet doesn't let them become overbearing. So far I have kept constant this year in being seasonel with my fragrances but I am pretty sure the doldrums are coming out in the fragrance community. So how is everyone doing, broken down yet and brought out the spring fragrances?
image provided by artnet.com
image: Emma Pink & White by Jesse Frohman
Posted by Unknown at 7:56 AM 9 comments: 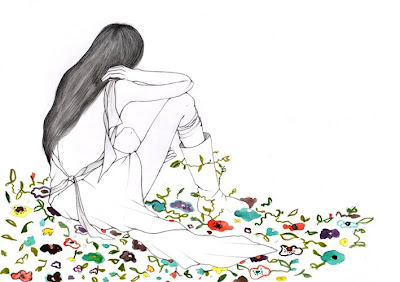 I need something so ridiculously calming right now it is not even funny, the answer: Angelique Encens. It's rainy and cold outside the way it is supposed to be. Last night I made homemade chicken broth and now I'm thinking I need to make soup. I want something simple and completely comforting.
image provided by http://designdig.blogspot.com/2008_05_01_archive.html
image: by Ana Laura Perez
Posted by Unknown at 7:44 AM 4 comments:

So today is girls night, my roommate broke up with her boyfriend of just over a year this last sunday, and the apartment has been down with good reason. So in a strange turn of events we have a Mary Kay lady coming over well not so strange considering she is my roommate's friend who also happens to the cousin of the now ex-boyfriend (the cousin completely understood why Nee broke up with her cousin). As for tonights menu: artichoke dip, apple cake (made by me), wine, and something else. And more break up news apparently my little brother broke up with his girlfriend 3 weeks ago (what is this the break-up year?).

As for my fragrance choice: Lolita Lempicka, I need something girly and fun, and this fits the bill. As for next Monday's date scent: Magnetism by Escada. Never fails on the compliments and it is just plain sexy.

image provided by http://www.flickr.com/photos/roxy/2158559578/
image by Stella Im Hultberg
video uploaded by curious13april
Posted by Unknown at 8:00 AM 3 comments:

So I am re-entering the dating world, I figure I need to force myself to do this, considering my character is not to. So the question is what is everyone's date night scent?
image provided by artnet.com
image: Woman in Red by Guy Pene Du Bois 1938
Posted by Unknown at 11:24 AM 4 comments:

Pretty spring makeup find that works for all seasons, so I have a hard time sometimes finding makeup, the combination of pale-skin and dark hair can sometimes be a conundrum. But I must say I am horribly impressed by Laura Mercier's First Blush Face Palette, the colors are really understated and yet instantly awaken the face, it instantly gives you a gorgeous glow and warmth.

image provided by http://imoreta.wordpress.com/2007/06/03/audrey-kawasaki/
imabe by Audrey Kawasaki
Posted by Unknown at 8:02 AM No comments:

What is the answer to fragance boredom in a recession? Go get your box of samples out! Today I am visiting Diptyque's Philosykos, now I feel rather stupid that in my obsession a few years ago with fig, I didn't bother to try Philosykos; which is kind've blasphemous as far as fig scent lovers go. This september I received a sample of it with my Ambre Russe sample, not being in the mood for a fig scent I didn't bother to try it, but did stick it in a box for future sampling. Well I am kicking myself because is quite frankly this is the perfect black mission fig scent: green, sweet, creamy all at the same time.


image provided by artnet.com
image: Good Afternoon by Alex Katz 2007
video uploaded by McTezTube
Posted by Unknown at 10:03 AM 4 comments:

So there is nothing like a second go at something, in this case it is Ineke's Evening Edged In Gold. I can smell the osmanthus now, this is as smooth as silk, there are no velvety apricot fuzz qualities to it. While it is a floral this is not a spring or summer scent, there is a rich depth to it that can be overwhelming in the summer heat, it is strangely aquatic, but not in a melon sort of way. What strikes me the most about this scent is just how very Northern California it feels, I can't explain it other than this is the scent of dusk in Northern California in the Bay Area with a definate hint of breeze from the bay. I admit I am so glad I retried this scent.
image provided by artnet.com
image: Transitions XI by Barbara Weldon 2005
Posted by Unknown at 8:24 AM 8 comments: